Whisky and Wine are the worst siblings!

Whisky and Wine are the worst siblings!

“Whisky and wine don’t mix, they are a bad combination.” That’s what I said to someone that jokingly suggested I try it to ease my miserable mood. I later drank a shot of whisky and felt much better. However, after a few hours I started pondering on how I can be 100% certain of something I never tried or which I’ve never heard anyone try. The person that suggested I try it had never tried it themselves. I picked up my mobile phone and rang six of my friends from different nationalities (Polish, Irish, British, Ghanaian, Portuguese and Spanish), and asked them the same question: “Is whisky and wine a good mix?” They all replied “No!” I then asked, “Have you ever tried it?” to which they all replied, “No way!” My Ghanaian friend went as far as warning me never to attempt mixing both drinks, because it was too dangerous! 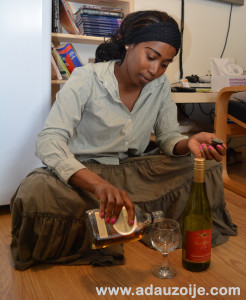 It’s great to have a friend who cares about me, but how deadly can it be mixing whisky and wine? I am an occasional drinker and exclusively drink white/red wine, whisky and Irish cream only. I hate beers and other alcoholic drinks! I never get intoxicated and always drink responsibly. But today, I wanted to try something different. I wanted to be as crazy as whisky but well-behaved like wine.