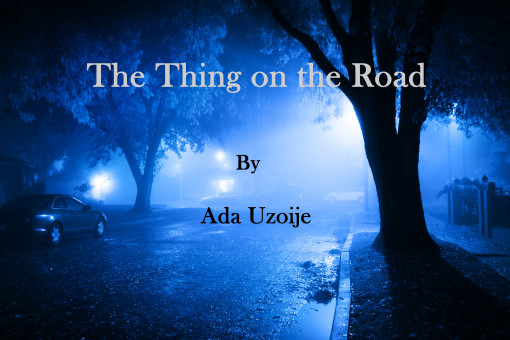 “There is something on my road, but I don’t know what it is.” I glazed through the little opening of my curtain to evade being seen. The nearest street light was far away from it, so I was unable to see the whole of it. From the little I could see, the thing on the road had an unfamiliar shape, which I couldn’t describe. The thing on the road was incredible tall, naked as in flesh but, that thing is not human! I sensed something sinister! I recently moved into this third floor apartment in a rundown town with no community spirit. This town is full of noise and littering at every corner of the streets. Somehow, the noise does divert me from thinking deeply about my situation. The voice of the vehicles and pedestrians remind me that I am not alone, thus serve as my night nurse to a good night’s sleep. But, tonight I was unable to sleep. I just woke up a few minutes ago at 1:45am, because something in my head told me to, “Look through the window”. And I obeyed this voice. That was the worst mistake I made since two months ago, when my long-term fiancée found out that am a regular at the local brothel. She dumped me and threw me out of our 3-bedroom beautiful home. Now, I am living in this tiny studio. I am still paying the mortgage for our home and maintenance allowance to our 5 years old twins. I’m very bitter about my life, but I will never apologize to her.

I am a 27 year-old handsome young man, who thinks life is for living. My name is Boris, but the ladies call me ‘Hunk’. My fiancée says I am an idiot not a hunk; she is so cruel. I still love her – the mother of my children. Still staring from my window, holding the curtain with my right hand, I noticed the thing on the road had remained still in the exact spot since I had been watching. It’s has been looking straight at one direction and had not stir. Its presence was undeniable creepy and I marvelled on why the few passing vehicles and pedestrians had not noticed it? Then, ‘Bang! Bang! Bang!’ the sudden loud bang made my heart jump. I was quickly distracted from the window and saw myself staring at my room’s greenish door. I disliked the green colour; it makes the room uninviting. I was going to repaint the door with white but kept forgetting to buy the paint. The knocks were getting louder; I decided to investigate but couldn’t help discern, ‘Who is knocking on my door at this hour?’ My feet started wiggling as I felt some rush of sweat battling to explode from within. I wiped the moisture from my forehead with my hand, but that didn’t stop more from exploding. I took four steps forward and inspected my reflection in the wall mirror facing me. My six-packed stomach made me look tough. The truth was bitter; I am tough from the outside but weak from within. If it were armed robbers behind my door, I was so finished. I am better off practicing playing dead.

I looked through my door’s magnifier hole and saw the landlady with two policemen standing outside. “Open the door, Boris,” my landlady shouted. I knew she had heard movement in my room, so I opened the door immediately. The two officers greeted me with an amusing smile, and I suddenly knew why, when my landlady said in disgust, “Put some proper clothing on.”  I felt embarrassed, rushed back into my room, banging the door behind. I quickly wore light red jeans and a white shirt. When I returned back outside, my landlady had left, and it was just the two officers. This time around, my confidence quickly surfaced as I led the conversation, “Have I committed a crime?”

“I am Jake and this is my partner…” Jake pointed to his colleague, who appeared to disliked me “…Derek. You are Boris?”’

I paused for a second with annoyance. The officers are pissing me off by not replying to my question, so I replied, “That will be me. Are you here to arrest me?”

“No Sir! We need you to come with us outside the building.”

“I’m not coming with you!” I leaned back at the door and watched the officers thinking of their next move.

“We just recovered a stolen car, which is registered under your name,” said Jake

“My car was stolen?” My faced puzzled with denial, as I couldn’t believe the car I parked on my road 4 hours ago had been stolen.

“Are you coming?” Derek asked with authority. I hated policemen like him, rude and lacking manners. I ignored him and paid attention to Jake, who had more interesting thing to say, “We recovered a red ford mustang 2015 number plate. Is that your car?” Jake asked, but immediately started coughing.

I ignored Jake’s cough and replied, “That’s my car! Are there any scratches on it? I’ve got to ring my insurance.” I was about to open my door to obtain my phone when I got interrupted by the ugly Derek, “We’re very busy, and we need to go now.” I decided not to argue but to agree with Derek, so I made my way downstairs while the officers escorted me from behind.

The outside of my apartment was unusually quiet. There was no sense of life, apart from us and the echoes from the fried chicken and chips shop at the other side of the road. The police officers had now crossed over to the other side of the road where they parked my car. They waited for me, but I hesitated when I remembered the thing on the road. I looked at both sides of the road, but I spotted no presence of the thing. ‘It’s probably the stress of living in this dreadful neighbourhood,’ I assured my mind while crossing the road.

“Have you got an ID with you?” Derek asked, holding my car’s key.

“Yes!” I dipped inside my trousers’ pocket and emerged with a brown wallet that carries my photo driving licence. I handed my licence to Derek, who made a mockery of my appearance. “You look so thin in this photo,” he laughed.

I hated Derek more and glanced at Jake to rescue me from his dreadful colleague. Jake seemed to like me, as he eye signalled to Derek to wrap it up. I received my car’s key and quickly checked the inside of my car; nothing was stolen or broken, and there were no scratches. I was very happy. “Did you arrest the guy that stole my car?” I asked Jake.

“No, he died in the driver’s seat from reason we don’t know. We have to wait for the autopsy result.” Jake replied.

“That’s terrible!” I pretended to care.

Derek was getting ready to walk off, but then turned round and said, “I would get a cheaper car if I was you; less trouble living in this area.”

“Okay!” I said with a clear facial expression that meant ‘Mind your business!’

The officers made their way to their car and drove away. I was alone. I locked my car and walked to the main entrance door of my apartment. I inserted my key into the door’s knob and twisted it clockwise. An unexpected sound of an opening car door vibrated inside my ears, I looked back, and it was my car! The thing on the road was opening my car door. The thing had no face and in realisation of this finding, I screamed. The thing turned around and looked at me with an unspeakable evil. I screamed again and the thing rushed toward me. I shivered with the greatest fear I had never experienced before. Then unexpectedly, the laugher of three teenagers emerging from the chicken and chips shop walking towards my car distracted the thing as it hissed at me and flew back into my car. The thing sat motionless in my driver’s seat but left the door wide open. I saw this as my opportunity to escape, so I concentrated on opening the main door, but in panic, my keys fell on the ground. As I picked it up, I overheard the conversation between the teenagers.  “The car door is open!” shouted one of the teens approaching it. The others followed her behind. “I bet the owner was drunk and forgot to lock it,” said the tallest of them. Confusion struck me when I questioned why the teens were blind to seeing the thing still sitting on my driver’s seat.

Two of the teens sat in the back seat, and I overheard the one sitting on the driver’s seat saying, “The stupid guy left his car key in the ignition.” They all busted in laughter and made more stupid remarks about my foolishness, but if only they knew they were the stupid ones that couldn’t see. “My car spare key was upstairs!” I was very sure. I stared in dismay at the creepy thing in the car that didn’t stir or move whilst the driver sat on it. I held my car key to my chin as my car slowly disappeared in the distance. My gut was telling me, ‘I’m next’.